The Heritage of Ilocos Norte, Philippines 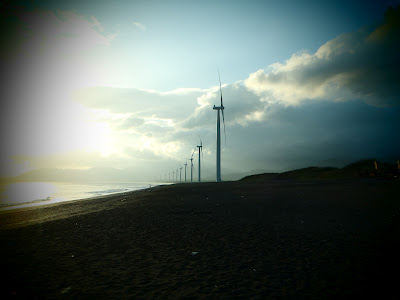 Of all the forces nature, we should think the winds contains the largest amount of power, that is the power to move things………. 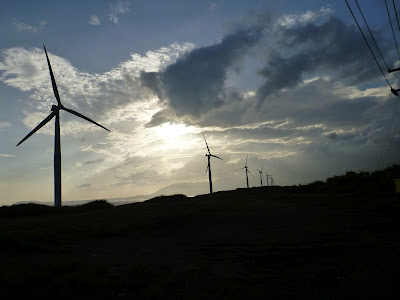 Woke up early as early  from my home stay in Saud Beach, to prepare for my first destination of the day, Bangui Windmills. A lucky, blessed sunny day. 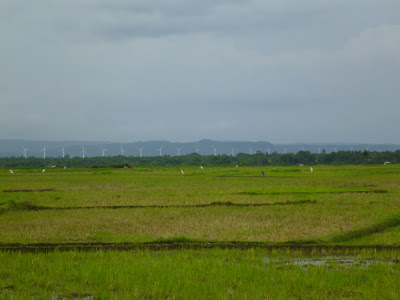 Looking far to the wind mills touch my sensitive soul to tears. My tears fell enjoying my excitement to come close with the giant wind mills. Tears are words that my heart cant express..
The awesome view was a great feeling.

Stepping down from my service motorcycle, I jump and run like a kid . The sight really mesmerized. After more than two years of  watching this in the net, now I finally seen this for real.

Bangui windmills, the sight to behold…. 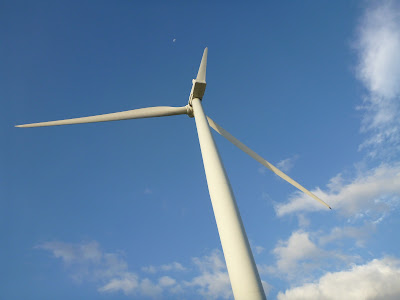 The Bangui wind mills are located in Bangui Ilocos Norte, Philippines, were a project by the North Wind Development Corp. as a practice of renewable energy sources and to help reduce the greenhouse gases that cause global warming. The project is the first “Wind Farm” in the Philippines consisting of wind turbunes on shore facing the West Philippine Sea and considered to be the biggest in Southeast Asia. The project sells electricity to the Ilocos Norte Electric Cooperative(NEC) and provide 40% of the power requirements in the province of Ilocos Norte 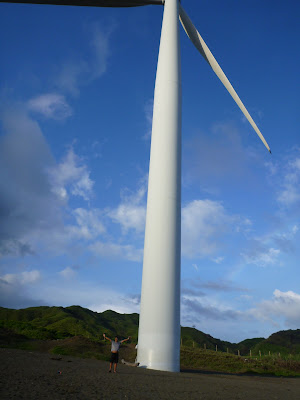 The wind mill face the sea from where the wind blows toward the land. Its location along the shore is optimal in removing windbreaks and has a terrain roughness of 0 (Zero).The site Bangui Bay, boarders the West Philippine Sea, free of any trees and vegetation that is approximately 9 kilometers long and 100 meters wide. The area is undeveloes and uninhabited making it ideals as a site and poses no treat to the environment.
The location of the Philippines being near the Asia Pacific monsoon belt is ideal for installing wind turbines. The Philippine Atmospheric, Geophysical and Astronomical  Services Administration  attests that the Philippines has a mean average of 31 watts per square meter(W/m2) of wind power density. 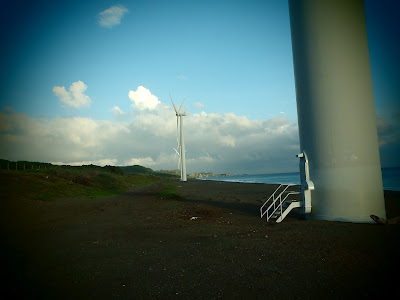 In the 1990s former Governor Ferdinand Marcos, Jr. aggressively pursued the development of a power plant in Ilocos Norte due to the poor quality of power provided by the National Power Corporation. (NAPOCOR).
In 1996, the National Renewable Energy Laboratory (NREL) conducted a wind resource analysis and mapping study. It concluded that various areas in the Philippines are amenable to wind power installation
North Wind Power Development Corp, a Danish power firm, supplied the wind turbine-generator units (WTGs) for the site, similar to those already found in Denmark. The project is to be developed in three phases.
Phase I of the project erected 15 wind turbines spaced 236 meters apart on-shore. This was inaugurated on June 18, 2005
The Northwind Bangui Bay Project was the first project in the Philippines to have the Emissions Reduction Purchase Agreement (ERPA) under the Clean Development Mechanism. The Bangui Bay Project is also the first Philippine recipient of the Carbon Emission Reduction Certificates (CER’s) from the Executive Board of the United Nations Framework Convention on Climate Change.
Phase II is completed June 2008 adding 5 more wind turbines carrying the same capacity as those already existing raising the total capacity to 33MW. All of which follows the arc of the Bangui Bay creating a fusion of technological and natural elegance. Phase II aims to increase the project’s power contribution to Ilocos Norte from 40% to 70%. 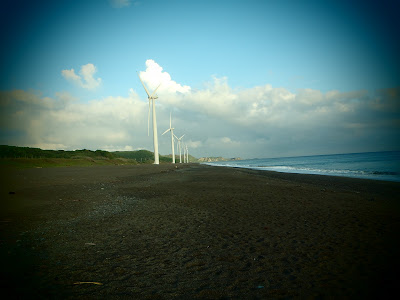 Each wind turbine is capable of producing electricity up to a maximum capacity of 1.65MW, totaling to 24.75MW in all. They have three vertically oriented rotor blades on top of a 50m-high tubular tower. The nacelle (casing), which encloses the generator, the gear box and the yaw mechanism (which turns the blades into the wind), is at the rear of the rotor blades. Each wind turbine has a 6-meter diameter base.
The wind turbines capture wind energy and transformed by electrical generators to be transformed into usable energy. The NorthWind Bangui Bay Project produces a total of 74,482MWh of electricity annually. Electricity generated by the wind mills will be sold to INEC under a 21-year Electricity Sales Agreement (ESA) at PhP 4.43/kWh. The expected life of the equipment is 21 years.
The Northwind Bangui Bay Project approximates that 56,788tCO2e (tons of carbon dioxide equivalent) of Greenhouse Gases will be reduced per year for the duration of the project activity.
To ensure that the wind power project would not cause transmission line overloads or instability, a System Impact Study for the project conducted by the NPC (National Power Corporation), which includes a power system simulation study to investigate the system performance of the induction generators and studies of loadflow and stability to determine the adequacy of the power grid. The study indicated that grid reinforcements and improvements in the form of new transmission substation facilities and power conditioning devices like capacitor banks. 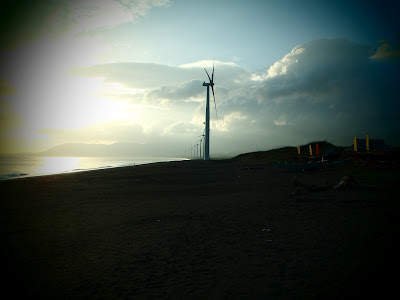 As apart of the study during the administration of late President Marcos, and the continuous price hike of crude oil in the international market these wind mills is the best alternative to energy sources. 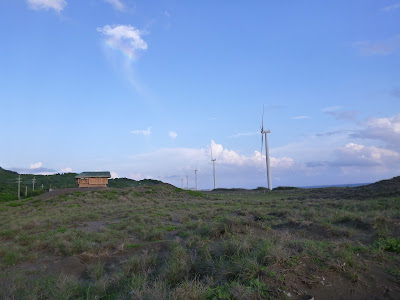 In the European countries wind mills are ordinary sight, but in the Philippines the Bangui windmill is a power and a beauty at the same time a novelty…. 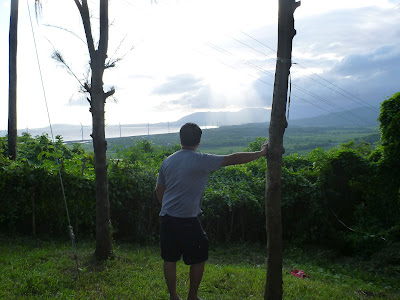 Because of  popularity of these windmills among travelers, and frequently featured in the country tourism advertisements, firmly its status is a tourist destination.
Bangui wind mills is a must to visit.
Its just few kilometer in the famous Pagudpod beaches. 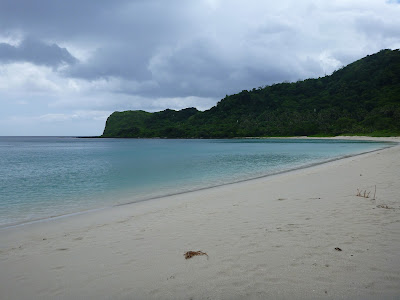 Bangui Wind Mills is a part of the Pagudpod South Bound Tours which includes the following:

For some details and information, you can contact UDDON’S Home Stay, own and manage by Mrs. Henrilyn Uddon and Mr. Henry Uddon with mobile number
+639202859087. They offers reasonable  accommodation for small and big group of guest.

How to get there:

From Manila, travelling Pagudpod is 10-12 hours overnight bus ride. Take Florida Bus Line,
with telephone number 02-743-3809, in Cubao or Sampaloc terminal. Just sleep and when you wake up you’re there.